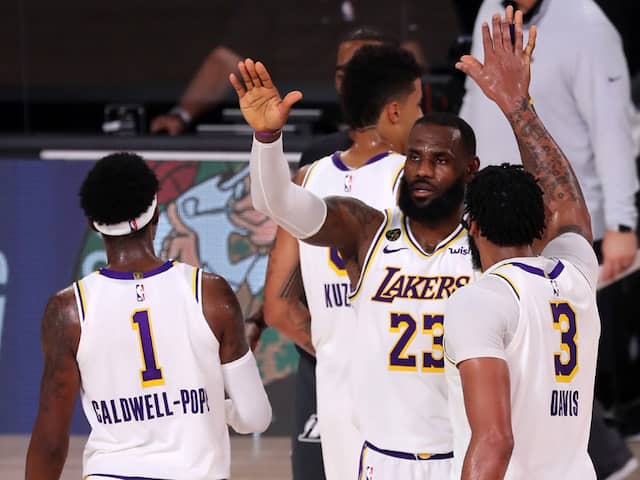 LeBron James celebrates with teammates during the NBA playoffs.© AFP

In a classic NBA performance, LeBron James led Los Angeles Lakers to a 2-1 playoff series lead, after defeating Houston Rockets, 112-102, in the Western Conference semi-finals. Currently 35, LeBron James’ vintage performance caught everyone off guard, and received rave reviews from basketball fans across the world. New Zealand all-rounder Jimmy Neesham also praised The L-Train. Taking to Twitter, Neesham said, “How can you actually not like Lebron James? Just enjoy witnessing all time greatness while you can. #NBAPlayoffs”.


How can you actually not like Lebron James? Just enjoy witnessing all time greatness while you can. #NBAPlayoffs

After the victory, James also became the all-time leader for wins in NBA playoffs. It was also his 162nd career victory in postseason. He finished with 36 points, five assists, four blocks and seven rebounds. Other than James, team-mate Anthony Davies and Ranjon Rando also put in good displays. Davis registered 26 points and 15 rebounds.

Alongside, Michael Jordan, Kobe Bryant and Kareem Abdul-Jabbar, James has been included in the Greatest of All-Time bracket. With his latest scintillating display, fans of James could have an advantage in the debate.

He has won three NBA championships. James has also won the NBA’s MVP Award four times, two Olympic gold medals and also three Finals MVP Awards. He has been included in the All-NBA First Team a record 12 times, and All-Defensive First Team five times. In total, he has also played in 16 All-Star Games, where he was the All-Star MVP thrice.

Neesham’s tweet received mixed reviews from Twitter users. Many felt that there are other basketball players better than him. Others agreed with Neesham.

The all-rounder will be playing for the Kings XI Punjab in the upcoming edition of the Indian Premier League.

Topics mentioned in this article