Why Does the Entire NBA Hate the Los Angeles Clippers... 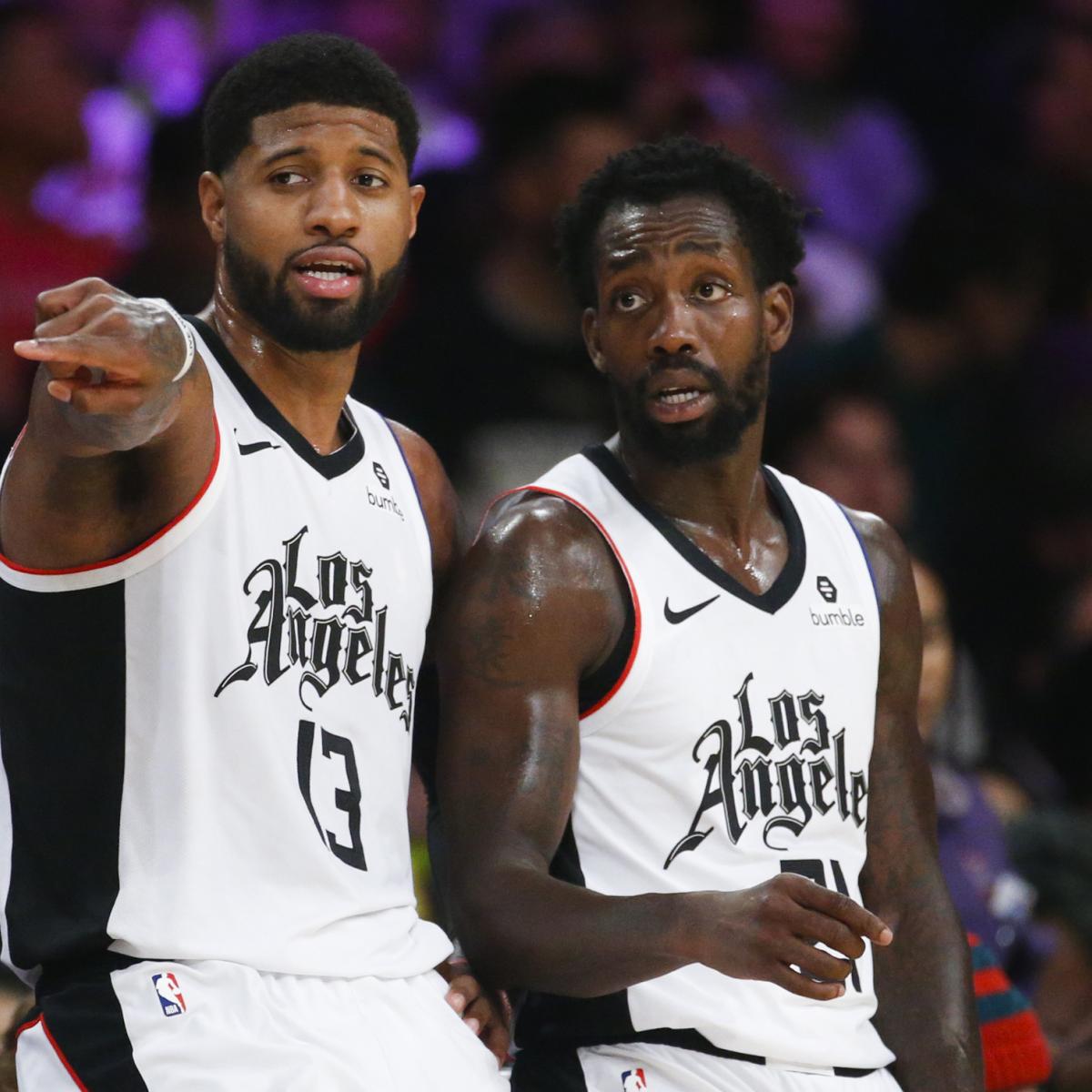 A funny thing happened Tuesday night after the Los Angeles Clippers fell to the Denver Nuggets in Game 7 to complete a historic second-round playoff collapse: Everyone came with their knives out.

Players clowned them. Portland Trail Blazers guards Damian Lillard and CJ McCollum got deep in a bottle of McCollum’s new signature wine and got some jokes off, just a month after Lillard’s social-media feud with Paul George and Patrick Beverley. Los Angeles Lakers forward Jared Dudley also got in on the fun.

The media machine was ready to go, too. Several stories came out in the hours after the Clippers’ Game 7 loss with new details about the team’s behind-the-scenes turmoil and speculation about the summer 2021 free agency of George and Kawhi Leonard, which had never been a consideration for most people while the Clippers were among the title favorites going into the playoffs.

Toronto Raptors fans ate the loss up as vindication for their belief that Leonard shouldn’t have left their team after leading the franchise to its first-ever NBA championship in 2018-19.

For everyone else, it was open season. Any jokes that had been confined to Twitter drafts were finally allowed to fly. If you thought the Houston Rockets’ Sunday night demise was the most fun anyone had had on Twitter in a while, the Clippers going down in flames dwarfed it.

Any team that blows a 3-1 lead in the playoffs, especially going in as favorites, will be ridiculed. Ask the 2015-16 Golden State Warriors, who, four years later, still can’t quite live down the “3-1” jokes after losing to the Cleveland Cavaliers in the Finals with the best regular-season record in NBA history. But the level of glee on display from all corners at the Clippers’ demise was something to behold.

Jokic said “we felt like this was something we could get thru”. Denver used those dudes as a life lesson. That’s who the Clippers are bro. They’re something that will happen to you that you can get thru. Dont even worry about it.

Clipper hate is nothing new. Back in the Lob City days, B/R’s Howard Beck explored the topic at length. Some of the rationales from those days carry over to now, mainly the notion that they complain too much to the officials during games. But the 2019-20 Clippers have their own identity when it comes to being hated.

Since former Microsoft CEO Steve Ballmer bought the Clippers for $2 billion in 2014, he has spared no expense in his efforts to transform the franchise that was the laughingstock of the league for decades under disgraced former owner Donald Sterling.

Ballmer has been willing to spend into the luxury tax on his roster and splurge on player amenities. He’s made Doc Rivers one of the league’s highest-paid coaches. He’s currently bankrolling a brand-new arena in Inglewood (set to open in 2024), even paying $400 million for the nearby Forum to make a lawsuit go away and clear the path to take the Clippers out of the Lakers’ shadow.

All this to change the image of a franchise that has been the NBA’s little brother for its entire existence.

These changes paid off last summer when, coming off a surprising trip to the playoffs and a more-competitive-than-it-had-any-right-to-be first-round series with the Warriors, the Clippers pulled off the biggest offseason coup in recent memory. They signed Leonard, the reigning Finals MVP, and trading five first-round picks and promising young guard Shai Gilgeous-Alexander to make George his running mate.

Immediately, they became the trendy title pick, the new power that had a chance to finally rival the Lakers, one of the NBA’s premier franchises.

After securing George and Leonard, the Clippers went all-in on a marketing campaign with slogans like “Street Lights Over Spotlights,” “Driven Over Given,” “L.A. Our Way” and “We Over Me.”

The messaging was clear: Unlike the Lakers, who have coasted for years on past glories and seemed to land LeBron James in 2018 simply because he thought being a Laker sounded cool, the Clippers were claiming to do things the right way. They were positioning themselves as the team for the so-called common man, an antidote to the Hollywood excesses of their more famous building-mates.

But there were a few problems.

For one thing, the Clippers are claiming to be the city’s working-class team even as they’re stoking fears of gentrification with their fancy new arena in Inglewood, a largely Black and Latino part of Los Angeles. For another, most of the people they aim to represent have already grown up as Lakers fans, because why wouldn’t you root for the team in your own city that has Kobe Bryant, Shaquille O’Neal, Magic Johnson, Kareem Abdul-Jabbar and so many other all-time greats in its lineage?

Mostly, though, it came down to this: The Clippers players and organization talked a big game about being the new power in Los Angeles, the down-the-hall rival the Lakers have never had, but they haven’t actually won anything. Forget beating the Lakers in a playoff series or making the Finals—the Clippers have never made it to the conference finals, going back to their days in Buffalo and San Diego. The last time they had a chance, in 2015, they blew a similar 3-1 lead to the Rockets in the second round.

As if that’s not enough, their roster is perfectly constructed to make other fanbases mad.

Leonard left the Raptors and San Antonio Spurs in successive years. George forced a trade from a very good Indiana Pacers team and then, two years later, forced another trade from the Oklahoma City Thunder. Lakers fans resent that Los Angeles’ “other” team thinks it can be mentioned in the same breath as them. Blazers fans take the slights of George and Beverley against Lillard personally. Warriors fans remember Beverley’s reported comments to Stephen Curry that the next five years will belong to the Clippers.

Fans of practically every team in the NBA have a reason to dislike the Clippers, and that’s before getting into the gap between their talk and their track record.

Their players have, at every turn, carried themselves like a superteam without the bonafides to back it up. Not Leonard. He’s certified, with two Finals MVPs for two separate franchises, as even Lillard admitted Tuesday night. He doesn’t say much anyway. But George has given himself the “Playoff P” nickname and then underperformed. He’s continually moved the goalposts and made excuses when the Clippers have fallen short.

Beverley, by nature of being the defensive irritant he’s had to be to stay in the league all these years, is hated by everyone not on his own team. Those kinds of players are valuable to every contender, but his bombast rings hollow when they flame out in the playoffs.

This Clippers team hasn’t earned the right to act like frontrunners. On paper, they came into the season with arguably the most talented roster in the league, and they let themselves get comfortable and hand-wave away concerns about fit and chemistry by assuming they’d be fine in the playoffs, that the presence of Leonard and George would be enough to overwhelm a prepared and together Nuggets team with plenty of talent of its own.

James’ Lakers can mail in playoff games and coast because the equity he’s built up as the best player in the league for a decade-plus makes it reasonable to think he’ll flip the switch when it’s important. Jimmy Butler’s Miami Heat can beat the blue-collar angle to death because team president Pat Riley and head coach Erik Spoelstra have built that organization into the gold standard of work-first culture over the past 25 years.

Those teams have the credibility to carry themselves that way. In the eyes of many fans and fellow players, the Clippers don’t. Nothing they’ve done has earned them the benefit of the doubt, and deflecting blame after losing in the playoffs like they did on Tuesday didn’t help their case.

So, yes. When these Clippers blow a 3-1 lead after being up by double digits in three straight elimination games, people are going to get their jokes off.

Sean Highkin covers the NBA for Bleacher Report. He is a graduate of the University of Oregon and lives in Portland. His work has been honored by the Pro Basketball Writers’ Association. Follow him on Twitter, Instagram and in the B/R App.