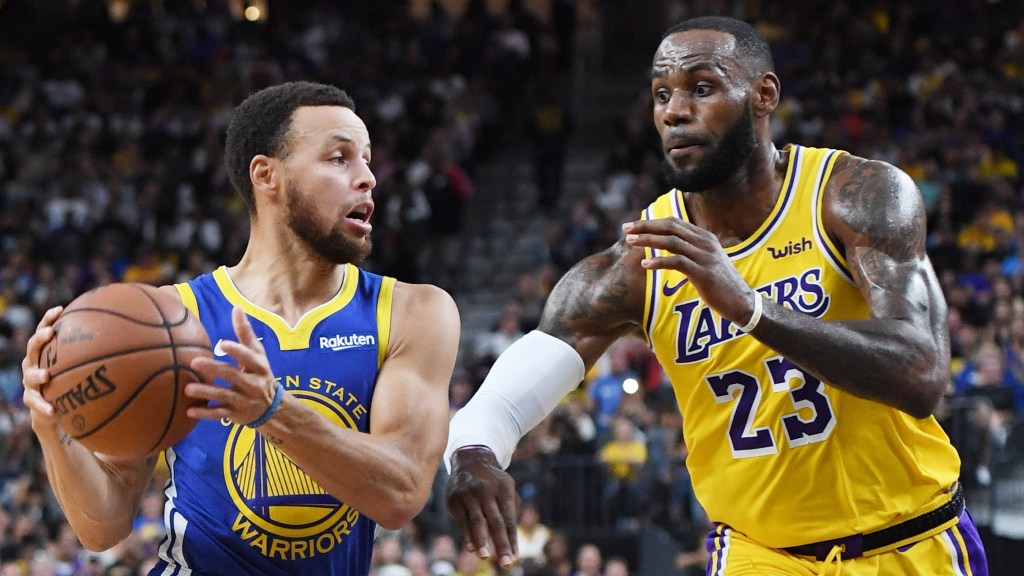 In a loaded Western Conference, one team stands above the rest.

It’s the same team that stood above the rest last year.

If the Lakers were supposed to have a championship hangover, the headache and lethargy sure are taking a while to kick in — LeBron James and Co. are 11-3 and have the best point differential in the league.

Warriors coach Steve Kerr isn’t surprised. Winner of eight titles — five as a player and three as a head coach — Kerr knows all about what happens after a team wins it all. To him, this part of the script.

Kurtenbach: Warriors are going to run Steph Curry into the ground

Kurtenbach: Warriors are a legit playoff team, plus 3 other lessons from their 7-game homestand

Kurtenbach: James Wiseman is discovering his super powers at a rapid rate

Kurtenbach: The Warriors have an $80 million problem

“I do know that when a team wins a championship, generally they come back the next year with more confidence. I imagine that’s what’s happening with the Lakers,” Kerr said Saturday.”

On Sunday, with a bit more film study, he confirmed his initial suspicion and made a bold comparison between the Lakers and one of the greatest teams in NBA History.

“You come back and it’s almost like a continuation of your championship season. You’re on top of the world. Everybody’s happy. You add some layers to what you already did. [And you have] deeper confidence in what you’re doing.”

Steph Curry knows about coming back from winning titles, too. He agrees with Kerr’s assessment.

“Once you get to that mountaintop, it’s an unreal feeling [and you] try to carry that over to the next season,” Curry said. “Obviously, the constantly of how they play, [their] chemistry — they have an identity and they know how to play off each other.

“Everyone’s playing a role and doing their part. It’s no coincidence how they’re starting off.”

» After recalling Kobe Bryant’s first meeting against Michael Jordan, Kerr was asked with whom he would like to connect another prodigiously talented youngster — Warriors rookie center James Wiseman.

Kurtenbach: Warriors are going to run Steph Curry into the ground

Takeaways from the Warriors’ loss to the Nuggets

It’s a pairing that makes all the sense in the world. Not only for the similarities in how they entered the league, but also in the way the two play the game, as well — rim-protectors who could knock down an outside shot and put the ball on the floor a bit, too.

It seemed as if Kerr had given consideration to the question ahead of time, though. Perhaps Wiseman’s Twitter handle, @BigTicket_JW, sparked the idea. Garnett’s nickname was “The Big Ticket”.

Wiseman, when told of his coach’s comments, loved the concept.

“I choose KG, too,” Wiseman said. He could hardly contain his smile before taking on a serious note.

“I would ask him about the tenacity of the game,” Wiseman said, noting that he also wanted to know about how Garnett approached each game and how he got better as a rookie.

“I just want to see his process and how he took the adversity and difficulties in the NBA and how he came back from that.”

Wiseman will have the opportunity to pick the brains of two other elite players on Monday when the Warriors play James and Antony Davis.

On Davis, Wiseman said he watched a lot of him growing up and that he studies his film — something he thinks will help him should the two be marched up against each other on Monday.

As for James, Wiseman, who was born in 2001, decided to make everyone feel old by noting that he only started watching him when he went to Miami.

“Obviously couldn’t watch when he was younger,” Wiseman said. “I was, what, two or three years old?”

Yes you were, James. Thanks for reminding everyone that they were not.

» Kerr said Sunday that Wiseman’s shrinking 3-point attempts aren’t by design, but are instead a byproduct of changing priorities in the offense.

“I’m fine with him taking threes. I want him taking threes,” Kerr said. “I think we’ve just been trying to get him to focus on driving to the rim. You know, when he drives, he takes the entire defense with him.

“We haven’t made the connection on the lobs very often, which I think we’d like to establish, but by reinforcing the drives, maybe we’ve taken him off the 3-point line a little bit. But I want him shooting threes and if he’s open, he’ll let it go.”

Wiseman, who has only taken one 3-pointer in the last three games, said that his only goal is to get “easy buckets”.

“Whatever I can do to get easy buckets for our team, I’ll do,” Wiseman said.