Vanessa Bryant claps back at LA cops over sheriff’s challenge... 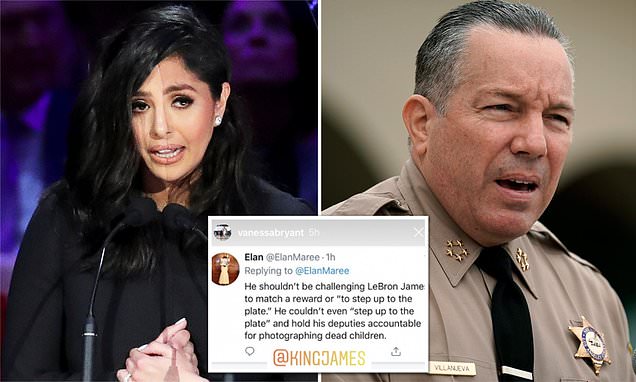 Vanessa Bryant took the Los Angeles County sheriff to task this week after he issued a challenge to LeBron James, asking the NBA star to match the $200,000 reward offered for information leading to the arrest of the Compton gunman who shot two deputies last weekend.

Bryant used Instagram Stories to showcase a series of articles and tweets criticizing Sheriff Alex Villanueva and his deputies over the leak of graphic photos showing the scene of the helicopter crash that killed her husband, LA Lakers legend Kobe Bryant, their 13-year-old daughter, Gianna, and seven others last January.

Bryant’s public clapback came after the Associated Press published an interview on Monday, in which Villanueva slammed elected officials, sports figures and civic leaders for ‘fanning the flames of hatred,’ saying they instead should emphasize trust in the criminal justice system.

Scroll down for video

Vanessa Bryant on Monday took to Instagram to blast LA County Sheriff Alex Villanueva over his comments challenging LeBron James to match a $200,000 reward for information on the Compton gunman. Bryant shared a series of unflattering articles and posts about the sheriff’s handling of the leak of graphic photos from the scene of her husband’s crash

The sheriff also rejected claims the criminal justice system is biased against people of color, saying his department is committed to thorough investigations, including of its own employees.

He challenged James to match $175,000 in what he said was donated reward money to find the shooter, he told KABC.

In response to Villanueva’s comments, Bryant shared a post from user @ElanMaree, who wrote: ‘How can he talk about trusting the system? His sheriff’s department couldn’t be trusted to secure Kobe Bryant’s helicopter crash scene, his deputies took and shared graphic photos of crash victims. Vanessa Bryant is suing them,’ as Fox News first reported.

Bryant then posted an article published in The Hollywood Reporter back in May about a lawsuit that was filed by the union for deputies of the Los Angeles County Sheriff’s Department seeking to keep the internal affairs investigation into the distribution of the crash scene photos private.

She also shared a screenshot from a post on lakersnation.com featuring an excerpt from a Los Angeles Times article, saying that a county law enforcement watchdog agency was seeking to subpoena documents related to allegations that Sheriff Villanueva ‘directed a cover-up’ by destroying evidence and suppressing an administrative investigation to avoid negative publicity.

Bryant filed her own lawsuit against the Los Angeles County Sheriff’s Department in May, accusing eight deputies of taking pictures of the ‘dead children, parents, and coaches’ in the crash and sharing them with others.

According to the complaint, one deputy allegedly even showed the picture off to impress a woman at a bar.

‘Mrs. Bryant has suffered an immense tragedy by losing her husband and daughter; her grief has been compounded by the severe emotional distress caused by the sheriff’s deputies’ misconduct and the Sheriff’s Department’s mishandling of that misconduct,’ the court papers stated.

As well as citing the action of the deputies, the claim also slammed the ‘department’s mishandling of this egregious misconduct’ when the photos surfaced.

It stated the offending deputies were simply told to delete the images and faced no discipline for their actions.

On Monday, Bryant re-posted another tweet criticizing Villanueva for allegedly failing to stop his deputies from leaking photos of the crash victims, but ended on a conciliatory note.

‘Not all deputies are bad apples. Prayers for the 2 deputies that were shot,’ she wrote.

Kobe Bryant and his 13-year-old daughter, Gianna, died in a helicopter crash along with seven other people in January

Wreckage of the crashed helicopter smolders on the ground on January 26, 2020 in Calabasas, California.

The reward for information leading to an arrest was swiftly offered following Saturday night’s ambush of two sheriffs deputies – 31-year-old Claudia Apolinar and her 24-year-old partner. Both are in hospital in a critical but stable condition, and a massive manhunt is underway for the black gunman, aged 28-30.

On Monday, Sheriff Villanueva appealed to James – an outspoken activist and supporter of Black Lives Matter – to match the reward money.

‘This challenge is to Lebron James. I want you to match that and double that reward,’ Villanueva said, speaking on KABC Radio, on the John Phillips Show.

‘I know you care about law enforcement. You expressed a very interesting statement about your perspective on race relations and on officer-involved shootings and the impact that it has on the African-American community.

‘And I appreciated that. But likewise, we need to appreciate that respect for life goes across all professions.’

A gunman in Compton, LA, on Saturday evening shot two deputies sitting in their patrol car

James, 35, is among the most vocal of athletes in his support of BLM.

He has frequently tweeted his frustrations about police shootings.

‘And y’all wonder why we say what we say about the Police!! Someone please tell me WTF is this???!!! Exactly another black man being targeted,’ James wrote.

‘This s— [sic] is so wrong and so sad!! Feel so sorry for him, his family and OUR PEOPLE!! We want JUSTICE.’

James has not yet responded to the sheriff’s challenge.

‘Let’s see what he does,’ the sheriff said.

‘I’ll be very curious to see what his response is, if any.’

FOX11 obtained a photo of the female deputy, identified by DailyMail.com as rookie deputy Claudia Apolinar, covered in blood after she was shot in the jaw by the unidentified male gunman just before 7pm Saturday.

The photo is a still from a security camera that captured the deputy calling for help as she tended to her partner, a 24-year-old male, who was kneeling behind a pillar after he was also struck in the head.

Pictures have emerged showing the injured LA deputy, shot in the jaw, assisting her partner

Authorities said that the deputies, who both graduated from the police academy 14 months ago, each sustained multiple gunshot wounds.

Investigators are still working to determine the motive for the shooting, which they said occurred ‘without warning or provocation’.

The suspect was described as a black male between 28 and 30 years old.

He was wearing dark clothing at the time of the shooting and was last seen in a black four-door sedan.

Donald Trump on Sunday said the man who opened fire should face a ‘fast trial death penalty’ if the deputies die.

Speaking at a rally in Nevada on Sunday night, he said: ‘If you murder a police officer, you should receive the death penalty.’

To loud cheers, he continued: ‘I just saw a video of that animal who went up to the car. They were unsuspecting, fine people – very fine people.’

He earlier called the shooter an ‘animal’ who needed to be ‘hit hard’ as the FBI was called in to help investigate.

The president tweeted: ‘If they die, fast trial death penalty for the killer. Only way to stop this!’

He had retweeted his son Donald Jr. who shared the footage, writing: ‘Please pray for these two Sheriff Deputies. Their lives matter!!! #BlueLivesMatter.’

Joe Biden said: ‘This cold-blooded shooting is unconscionable and the perpetrator must be brought to justice.

‘Violence of any kind is wrong; those who commit it should be caught and punished.

‘Jill and I are keeping the deputies and their loved ones in our hearts and praying for a full recovery.’