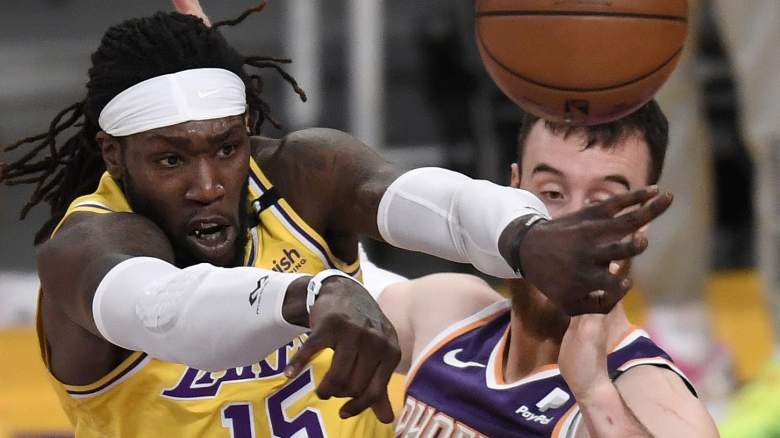 Montrezl Harrell took a shot at the Los Angeles Lakers over his sporadic playing time after turning in a big performance in the Drew League over the weekend.

Harrell dropped 38 points and 9 rebounds in a win for his Public Enemy squad and was named player of the game.

Harrell electrified the St. John Bosco High School venue with some massive dunks, maybe taking out some frustrations from a season with the Lakers that didn’t go exactly as planned.

After the game, Harrell reposted a video of one of his dunks that had the caption, “[Montrezl] finally got some run in LA,” an apparent reference to his role with the Lakers. Harrell put up the video with a crying laughing emoji, a virtual head nod to the sentiment.

Harrell signed with the Lakers last season in a somewhat surprising move, coming over after winning Sixth Man of the Year with the Clippers.

Harrell made it clear after the end of the season that he wasn’t happy with how he was used with the Lakers, especially down the stretch in the postseason. Harrell averaged just 10 minutes and did not leave the bench in two of the games.

The center rotation became muddied when the Lakers signed Andre Drummond and reportedly assured him a starting spot. That made it tough for the Lakers to fit three centers into the rotation, with veteran Marc Gasol also making a strong case to be on the court.

The 27-year-old Harrell was especially testy over the topic in his exit interview.

“Brother, you’re asking questions that are basically shown on paper. It shows the number of minutes I played, the amount of time I played, everything is right there in your hand,” Harrell said when asked about his role. “So as far as your question that you want the answer to, I don’t know how you really want me to answer that. I played my role man, and when my number was called, I did what the team asked me to do.

“As far as how that role played out in the rotation, you’re asking the wrong guy sitting in front of you brother man.”

Despite how things ended, the Lakers brass was very appreciative of Harrell for the energy he brought to the game and locker room.

“In terms of Montrezl, again, just such an appreciation for the level of passion and competitiveness that he plays with,” Lakers general manager Rob Pelinka said. “In his exit meeting, I told him if he was out on an off day playing against some of our younger assistant coaches in sort of a pick-up game, or if it was a big regular-season game, he would have the same level of passion and energy and drive.

“The guy loves basketball, he loves to compete. Every minute he plays with that level of intensity and it’s certainly something we appreciated all season long from him.”

It sounds like Harrell is ready for a fresh start and a system where he might fit in with better. However, the draw of playing in Los Angeles and seeing what the Lakers can do while healthy might push him to run it back for one more year.