LeBron James trolled a ‘Karen’ who called him a ‘f—ing... 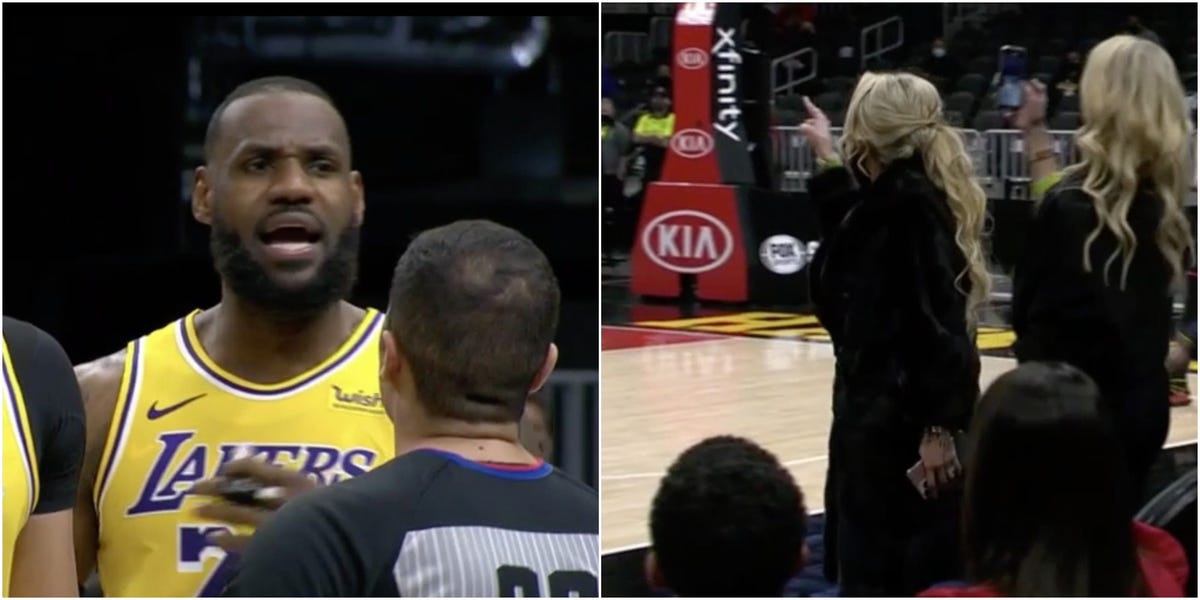 * LeBron James had a heated exchange with a 25-year-old woman during the Lakers’ win over Atlanta on Monday night.

* The woman, who has since been identified as Juliana Carlos, was kicked out alongside her husband after saying to James: “I will f— you up.”

* Later, James trolled her online by calling her a “courtside Karen.”

That’s what LeBron James called a 25-year-old woman who was ejected from the Lakers’ win over the Atlanta Hawks after the two were involved in a heated exchange during the game.

James’ feud with the woman, who has since been identified as Juliana Carlos, began in the fourth-quarter of  Monday’s game after James was heckled by Carlos’ husband, Chris Carlos, who is a courtside regular at the State Farm Arena.

Video footage from the game shows James making comments towards Carlos, while she responds angrily, jabbing her finger towards the four-time MVP.

Announcers on the broadcast compared Carlos to the popular “Woman Yelling at a Cat” meme for her finger-pointing.

According to Carlos, the confrontation began when James responded to her husband’s heckling, to which she did not take kindly, standing up and yelling at the Lakers forward.

Before things escalated further, security stepped in and escorted the pair out of the arena along with two other friends.

Carlos then accused James of calling her a “dumb b—-” and telling her to shut up.

She said in another now-deleted Instagram story: “And he started fighting with me, he goes, ‘Shut your mouth dumb b—-.’ So I go, ‘You shut your f—ing mouth b—-.'”

She added in a later story: “I have courtside seats that I pay for. F— you LeBron you’re a f—ing p—-, get the f— out of here. You’re going to let a 25-year-old girl intimidate you during a game. Bye b—-.”

You can watch the moment Carlos and her friends were kicked out below:

While Carlos was clearly riled by the incident, James seems to revel in it, and called her a “courtside Karen” post-game.

“I don’t think it was warranted to be kicked out. There was a back and forth between two grown men and we said our piece. He said his piece, I said my piece, and then someone else jumped into it and said their piece. I don’t think they should have been kicked out.

James then took to Twitter to call Carlos a “courtside Karen,” referencing the cultural phenomenon of the “Karen.”

In his post-game interview, James also suggested that the couple had been drinking alcohol, which he said may have made them act up. He didn’t provide any proof for that statement.

“They might have had a couple drinks. And they might have kept it going and the game wouldn’t have been about the game no more, so I think the referees did what they had to do. It’s fine.”

He added: “My guy tonight, I don’t want to say he went overboard, but he went a little bit out of bounds. Too close for comfort for me. And I said my piece, and we could have moved on, but I think it was so close to the officials that I think the officials heard it as well what he had said and it kind of got blown out of proportion.

“It’s just like sometimes on the floor when two guys get into a scuffle, or get into a little jostling and the refs try to break it up really fast and it looks like it’s bigger than it really is.

“That’s what it pretty much was tonight. But the difference is we’re on the court and we’re not having any alcoholic beverages. They might have had some alcoholic beverages on the side, so that could have made them feel a little tougher than they actually are.”