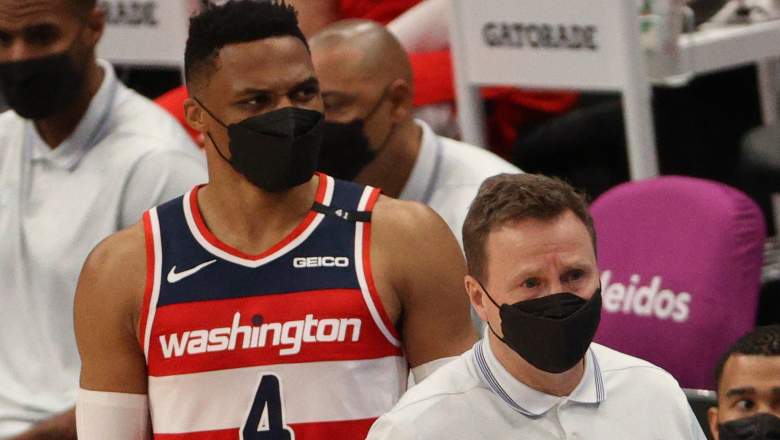 The Los Angeles Lakers have reportedly interviewed veteran head coach Scott Brooks for an assistant position on Frank Vogel’s staff, sparking some speculation that the team could try to make a move for former MVP Russell Westbrook.

Brooks agreed to mutually part ways with the Washington Wizards after five seasons this offseason. The Wizards made the playoffs thanks to a stellar late season run but finished just 34-38, which was the third consecutive season under .500.

The report on the Lakers interview with Brooks comes via veteran NBA insider Marc Stein.

The interview with Brooks quickly revved up speculation that the team would be looking to acquire Westbrook.

And, of course, we got some quality Photoshop of Westbrook wearing purple and gold.

Brooks and Westbrook have deep ties, reuniting in Washington last season after being together in Oklahoma City. The polarizing point guard gave a ringing endorsement of Brooks last season when his job was being discussed.

“Players get a lot of credit because we’re on the floor. But behind the scenes, Scotty is one hell of a coach. Not just that, a person, and he does an amazing job making sure we’ve got all our stuff together,” Westbrook said, per NBC Sports.

“If it wasn’t for him and his ability to be able to make decisions on the fly, make the right calls and put the right guys in and out of the game and put us in the right place to be successful, a lot of this stuff wouldn’t be happening. All of the outside noise, it really doesn’t matter, honestly, because we know how important he is, and I know how important he is to myself and to the team.”

A Lakers trade for Westbrook would be an interesting move, with the triple-double machine giving LA a certified third star next to Anthony Davis and LeBron James. However, the 32-year-old guard was the highest paid guard in the league last season thanks to a five-year deal worth more than $206 million. Westbrook makes $41.35 million per season, which would be tough to fit in with the contracts of Davis and James. However, his exorbitant salary could make him a more realistic trade target for the asset-straped Lakers if the Wizards want to go a different direction.

Here’s what Bleacher Report had to say about a possible Westbrook trade.

“Westbrook is still one of the league’s most devastating forces, especially when he’s taking smart shots and limiting his turnovers. He led the NBA with 11.7 assists per game this season, pulling down a career-high 11.5 rebounds and scoring 22.2 points a night.

A healthy LeBron James, Anthony Davis and Westbrook together should firmly be back in the hunt for the 2022 title and trading for the 2017 MVP would mean not having to pay Dennis Schroder this summer.”

The Lakers lost former assistant Jason Kidd to the Dallas Mavericks, quickly moving to find a replacement, with there being fears that Kidd could end up taking other coaches with him. The team quickly reached an agreement with former Grizzlies and Knicks coach David Fizdale, who reportedly took less money to head to Los Angeles rather than Indiana, per Marc J. Spears.

Brooks offensive mindset could help innovate on that end of the court. The Lakers had the best defensive rating in the NBA last season, but things routinely got stagnant on the offensive end if the 3-pointers were not falling. Brooks could hopefully help Vogel and Co. fix that.