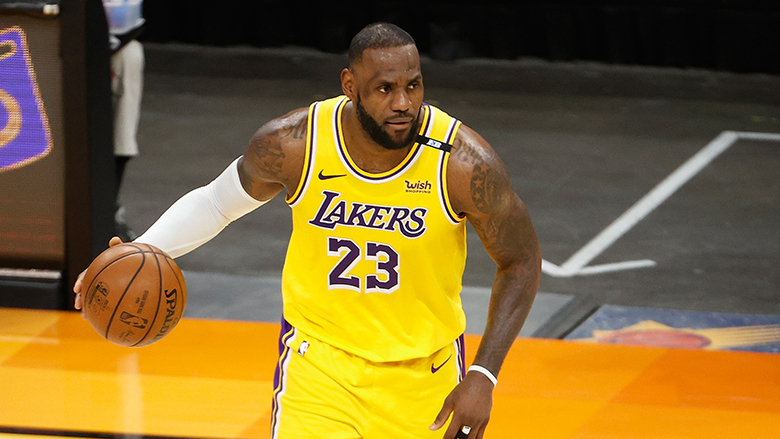 The season ended much earlier than expected for LeBron James and the Los Angeles Lakers so the superstar has been focusing on other things. He’s clearly been watching a lot of basketball as he’s been live-tweeting a number of playoff games. He’s also been seen spending time with the rapper Drake at one of his son Bronny’s games.

The rapper just recently released a new album but the song LeBron posted lyrics from was released back in 2015. It’s not entirely clear why he would post these lyrics. He’s frequently seen singing along with songs on his Instagram but he doesn’t really post lyrics on Twitter often. It appears that LeBron is trying to send a message to his detractors. With him getting knocked out early in the playoffs, many are ready to say he’s no longer the best player in the NBA. However, he could be ready to set off and prove everybody wrong once again.

ALL the latest Los Angeles Lakers news straight to your inbox! Join the Heavy on Lakers newsletter here

LeBron will be turning 37 during next season and there aren’t any examples of a player his age being the best in the world. He’s already defied the odds for so long that it’s just a matter of time before he begins to fall off. It remains to be seen if that will happen quite yet. It’s unfair to judge LeBron based on the first-round playoff series against the Phoenix Suns. He clearly hadn’t fully recovered from the high ankle sprain he suffered earlier in the season.

Prior to getting hurt, he was a strong MVP candidate. He likely would’ve won had he not gotten hurt. He’ll now have a long offseason to get fully healthy and should return to form. LeBron will start to decline eventually but he’ll have a couple of more seasons as a full-fledged All-Star. Also, the fact that he appears to have a chip on his shoulder heading into next season should only make him more dangerous.

LeBron has been the Lakers’ best player since he joined the team. That’s not going to be the case for much longer. Los Angeles needs Anthony Davis to start taking over as the team’s best player and leader. Based on last season’s performance, it looked like Davis had hit the next level and was ready to take over the team. He ended struggling for much of this season, even before he got injured.

A number of injuries held him back from breaking out of his slump. It looked like he was finally back on track during the Suns series but got injured again. The Lakers should be concerned with how well Davis’ body will hold up over the next several years. The big man will need to spend much of the offseason focusing on his body. If he can stay healthy, he should return to his elite ways.