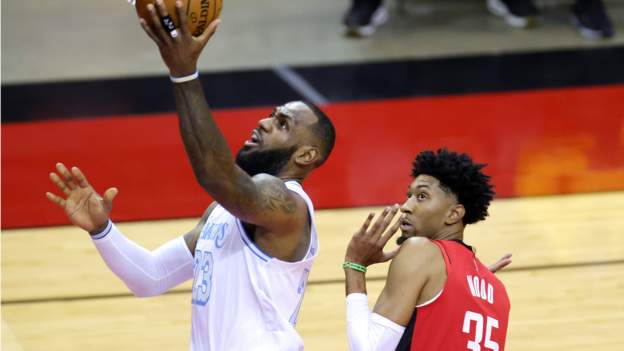 The Los Angeles Lakers continued their unbeaten run on the road with a comfortable victory over the Houston Rockets.

Defending champions Lakers have won all five of their away games this season.

Leonard scored 21 points in the third quarter as the Clippers rallied to win 130-127.

The Boston Celtics’ game against Miami Heat was postponed over coronavirus safety measures.

Miami did not have the required minimum of eight available players, while Celtics themselves only had eight.

Curry made two shots from 16 attempts – his worst performance in his career – before Damion Lee secured victory with four seconds remaining.

Shai Gilgeous-Alexander scored a season-high 31 points for Oklahoma City Thunder as they beat the Brooklyn Nets 129-116, while Utah Jazz beat the Detroit Pistons 96-86.