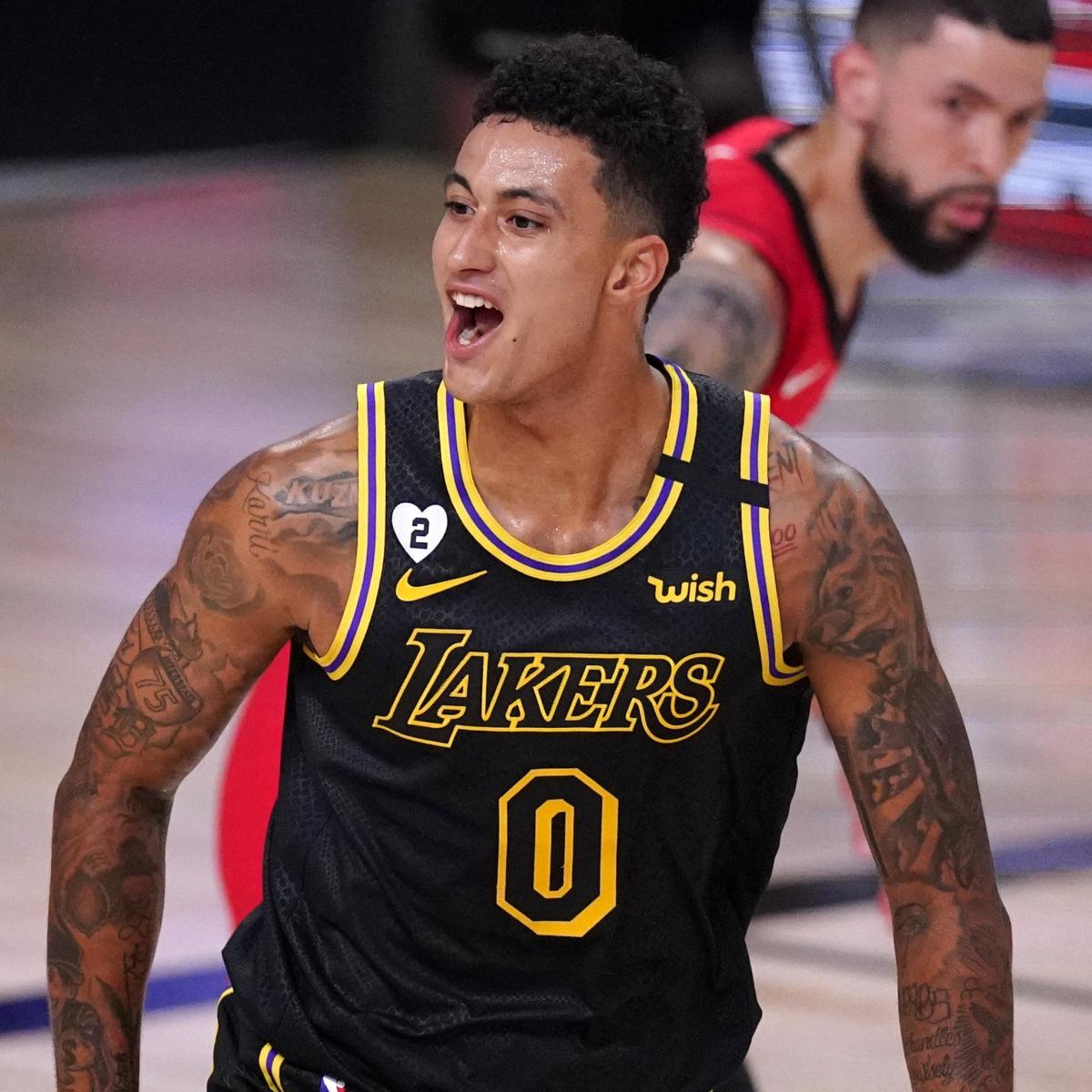 Once a surprising draft find who offered hope to a forlorn Los Angeles Lakers franchise, Kuzma’s future with the Lakers depends on his ability to go from pleasant surprise to valued contributor on a contender.

Most of the numbers suggest Kuzma won’t make that transition successfully enough to stick with the team.

With his true shooting percentage, player efficiency rating and box plus/minus all trending steadily downward since his rookie year, Kuzma clearly hasn’t benefited from the roster improving around him. Better teammates and a narrower role should have allowed him to pick his spots and play to his strengths. But this past season, he graded out as below replacement level for the first time.

The simplest explanation for Kuzma getting worse as the Lakers got better does his reputation no favors. It suggests he’s a classic “good stats, bad team” player. We might end the discussion of Kuzma’s status there, seeing as the Lakers don’t appear destined to be a bad team anytime soon, and that they have no shortage of the much more useful “good stats, good team” players on hand. But there’s more to unpack.

Kuzma’s diminishing production isn’t the only factor that points to an imminent departure. There’s also his lack of a clear role on a Lakers team angling to repeat as champs.

Had L.A. failed to backfill the starting spot vacated by Danny Green, Kuzma might have had the chance to prove he could contribute as a complementary scorer and emerging defensive presence on the wing. Instead, the Lakers signed Wesley Matthews to a one-year, $3.6 million deal, and he should match or exceed what Green gave them a year ago. Consider that role filled.

The offseason additions of Dennis Schroder (who came over in the Green trade) and Montrezl Harrell also mean there’s no question as to who’ll handle the scoring on the second unit. It’s clear the Lakers weren’t comfortable handing that responsibility to Kuzma, so one of the only other roles in which he could have excelled is off the table as well.

From a purely practical standpoint, this offseason made it harder to see where Kuzma’s opportunities will come. With Harrell and Marc Gasol coming aboard to join LeBron James, Anthony Davis and Markieff Morris, the vast majority of the frontcourt minutes are already spoken for.

Career-best accuracy at the rim and from the deep corners last season offers a glimmer of hope that “Kyle Kuzma: Supporting Scorer” might still be a thing. At a rangy and mobile 6’8″, Kuzma also has the tools to be a multi-position defender. He occasionally looked like one of those in the bubble.

Despite his numbers trending the wrong way and the Lakers’ fairly obvious belief that Kuzma isn’t ready to handle a significant role on a title-winner, it’s still possible to imagine a scenario where he’s able to reverse that narrative.

With that said, able’s good pal “willing” might not cooperate.

Kuzma is extension-eligible until Dec. 21 and is “expecting a sizable deal,” according to ESPN’s Brian Windhorst (h/t Austin Boyd of Heavy.com). He also believes “when it’s my time, it’s going to be a scary sight.”

Kyle Kuzma Believes His Time Is Coming, Will Be ‘Scary Sight’ https://t.co/NXJff4SpBP via @LakersNation

These are the things a confident, relatively accomplished Kuzma should say, particularly with restricted free agency coming in 2021. The alternative would be hilarious: Actually, I’d like to be underpaid on my next contract, please. I don’t think I’m going to get any better.

At the same time, not every potential restricted free agent vocalizes similarly grandiose intentions. It seems fair to conclude Kuzma genuinely believes he’s due a payday and a role commensurate with stardom.

The Lakers’ actions indicate they disagree.

In addition to Kuzma’s own unwillingness to occupy the only role available—modestly compensated support piece—the organization also seems hesitant to commit. The Ringer’s Kevin O’Connor reported Los Angeles was interested in trading Kuzma and Green in a package for San Antonio Spurs guard DeMar DeRozan prior to the 2020 draft (via Marilyn Dubinski of Pounding The Rock). That wasn’t the only time the Lakers probed a Kuzma move, and it surely won’t be the last.

The Lakers likely won’t extend Kuzma ahead of the 2020-21 season. Championship contenders can’t be in the business of preemptively overpaying talent. Teams at the top of the league can get established players to fill out the rotation on the cheap. The Matthews signing is just the latest evidence of the advantages contention and dual-superstar lineups afford.

If L.A. doesn’t extend Kuzma, he’ll become a restricted free agent next offseason. At that point, the market will determine what he’s worth, and the Lakers will have the opportunity to match any offer sheet he signs with another team. Without knowing what the contract numbers might be in that hypothetical, it’s tough to say what the Lakers would do. But when team and player have such divergent views on the future, the team’s vision tends to be controlling.

The organization is the one that ultimately decides who’s a priority and who isn’t.

Consider this, then, a prove-it year for Kuzma. Virtually every sign points to him spending the next chunk of his career on a different team, but he has the opportunity to force a reconsideration if he can dramatically exceed expectations.

That’s a tough (and oddly specific) growth demand for a player who’s already 25, but if Kuzma channels his best self, perhaps the Lakers will decide he’s a viable No. 3 behind the league’s best 1-2 combo. In that scenario, L.A. could justify paying a premium to keep him.

Anything short of that unlikely leap, and Kuzma profiles more like a trade chip or, failing that, a potential RFA departure.

There was a time when Kuzma was one of the lone bright spots in Los Angeles. Now, with James, Davis and a championship changing everything about the organization, Kuzma is just one of many lesser stars in a grand and gleaming constellation.

If he’s going to stick around, he’ll have to go full supernova this season. Otherwise, Kuzma will likely have to find his shine somewhere else.