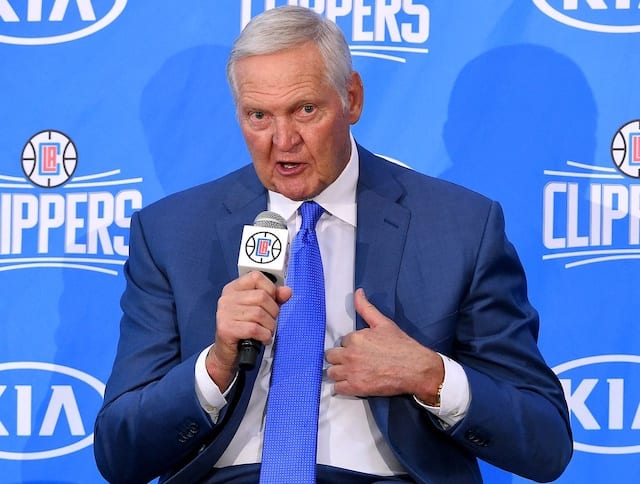 Los Angeles Lakers legend Jerry West knows a little something about building an NBA dynasty. The 14-time All-Star orchestrated the rise of the great 1980s Lakers team led by Magic Johnson and Kareem Abdul-Jabbar and the 2000s three-peat squad with Shaquille O’Neal and Kobe Bryant.

Tale has it West’s phone call with Kevin Durant also helped the 73-9 Golden State Warriors add the superstar to their roster that already featured Stephen Curry, Klay Thompson and Draymond Green. They went onto reclaim the NBA crown from LeBron James’ Cleveland Cavaliers that season and win back-to-back championships.

But West’s most recent feat has been creating a mighty opponent for the Lakers on their home turf. Last summer, the 82-year-old executive had a hand in snatching the two-time NBA champion Kawhi Leonard from under the Lakers’ nose and pairing him Paul George as the Clippers completed a blockbuster trade with the Oklahoma City Thunder Thunder.

In the eyes of many, the two Los Angeles teams were always bound to meet in the Western Conference Finals this season. That did not change with the NBA moving to Orlando and resuming games in the Walt Disney World bubble following a four-month hiatus caused by the coronavirus (COVID-19) pandemic.

And West, who joined the Clippers as an executive board member in 2017, would welcome the scenario with open arms, as he recently told Andy Bernstein during his Legends of Sport podcast co-produced with the L.A. Times.

West naturally touted the Clippers as having the superior roster:

“And how fun would it be for the Clippers and Lakers to play? Would it be for bragging rights of the city? It might be bragging rights for a season if the Clippers would win, but the Lakers’ history and the people they’ve had playing here, that’s never going to go away. But from now on when [the Clippers] have a new building here, they’re going to have their own group of fans. They’re going to be completely different than the Laker fans. And that’s what I think makes life so interesting.

West also called the Clippers one of “the most formative teams” in basketball and said their strength lies in roster depth. He he would not trade any of its top-10 players away because of their quality.

For all the anticipation of the Lakers and Clippers meeting in the Western Conference Finals, the Denver Nuggets have entered the picture. After falling into a 3-1 series deficit, the Nuggets have pushed the Clippers to a Game 7.

West was intrigued by prospects of Lakers-Clippers Finals showdown

Many proposals concerned with the NBA restart emerged before league officials and the NBPA hashed out the details of the Orlando bubble. Among them was the idea of Nos. 1-16 playoff seeding, regardless of conferences, to determine postseason fixtures.

That could have potentially resulted in an NBA Finals showdown between the Lakers and Clippers. West thought the title-deciding Battle for L.A. would represent the “ultimate competition.” However, he admitted he didn’t foresee the NBA commit to such a revolutionary format.

Have you subscribed to our YouTube channel? It’s the best way to watch player interviews, exclusive coverage from events, participate in live shows, and more!