How The Los Angeles Lakers Can Create A Superteam: 5... 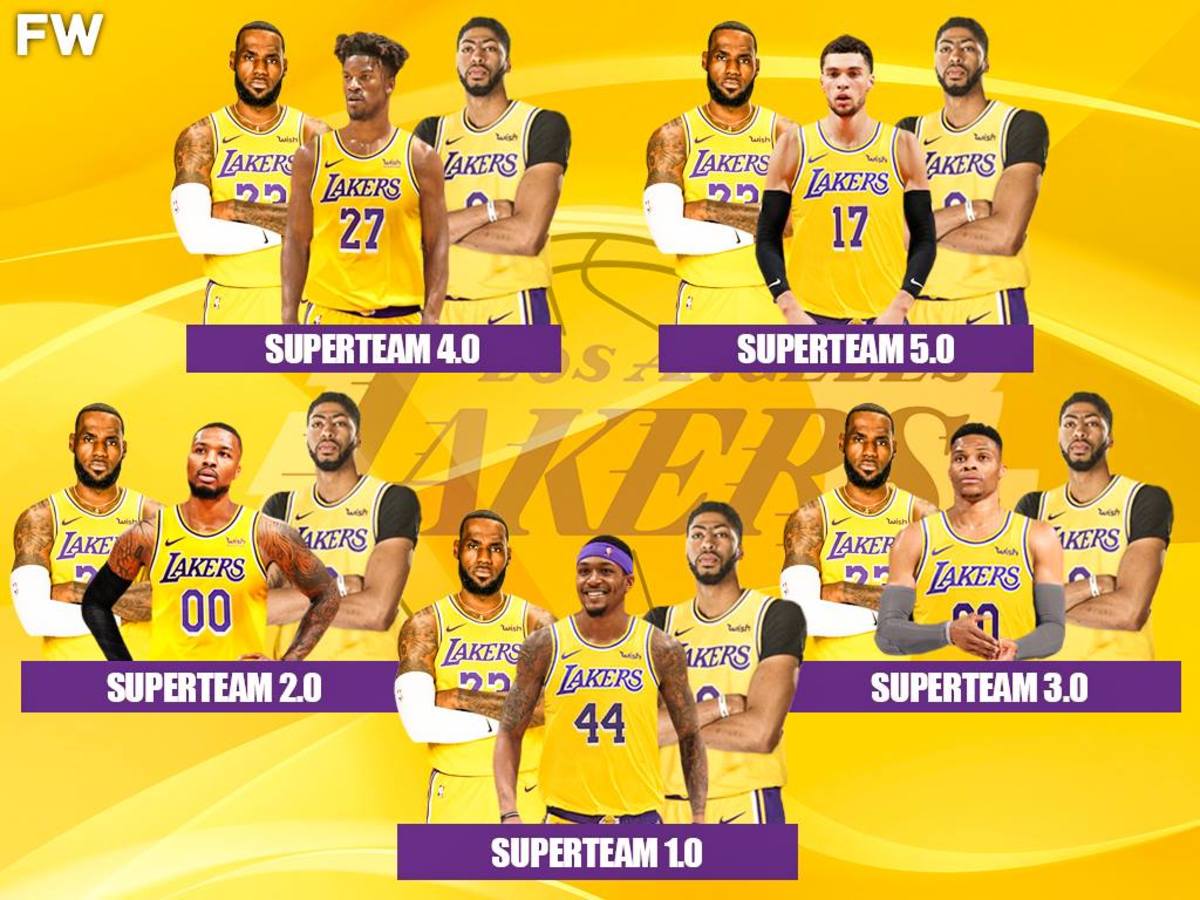 The disappointing first-round exit by the Los Angeles Lakers has many implications. For starters, it exposed the team’s need to stay healthy. Despite bringing veteran role players to the team in Dennis Schroder, Montrezl Harrell, and Marc Gasol, the star power was not enough when Anthony Davis was injured.

With the lingering question about Davis’ future health and the fact that LeBron James will be 37 years old this year, it poses a serious need for the Lakers to add a third superstar. Even with the Lakers fully healthy, the Utah Jazz and Phoenix Suns were both just games away from the Lakers in the standings before L. A. plummeted to the No. 7 overall seed.

In the Eastern Conference, the Brooklyn Nets will have a three-headed monster with Kyrie Irving, James Harden, and Kevin Durant for at least one more season. Assuming all can stay healthy, the Nets will be heavily favored by the oddsmakers. Let’s just say that the Nets make the NBA Finals against the Lakers. Is there enough to stop this combination?

James only has two years left on his deal. With Father Time creeping up, the question for six NBA championships is closing. If the Lakers, specifically LeBron, want to win more championships, then it’s time to go all-in, make the necessary changes, and bring a third superstar player to the city of Los Angeles.

The Lakers have quite a few upcoming free agents, but they can use that to their advantage to make a super package to acquire a superstar. Dennis Schroder and Alex Caruso could be dealt in a sign-and-trade. Their combined salary would be north of $20-30 million combined. Talen Horton-Tucker, another upcoming free agent, could command a salary north of $10 million as well.

Teams with superstar talent are going to want more to sweeten the pot. The team can package Kyle Kuzma and Kentavious Caldwell-Pope. To top it off, the Lakers can offer a 2027 first-round pick.

LaVine has just one more year left on his current deal. If LaVine wants out of Chicago, the Bulls could bring in some much-needed depth to complete this roster from top to bottom. The Bulls traded for Nikola Vucevic before the NBA Trade Deadline, but the combination of LaVine and Vucevic is not enough to take down the Milwaukee Bucks, Brooklyn Nets, or Atlanta Hawks.

Imagine moving LeBron back to the point guard position, which would allow LaVine to be the team’s primary scorer. With Davis in the paint, this would be the ultimate inside-outside combination. We saw LeBron lead the league in assists just one year ago. He would easily do that at age 37 with this group.

The locker room in Los Angeles would be the most focused group of any team in the league. By making this trade, the Miami Heat would avoid signing Butler to a max deal. If the team believes a rebuild is on the horizon, they can rebuild with young players in Horton-Tucker and Kuzma. This would be a great addition to the young core the team already has in Kendrick Nunn, Tyler Herro, and Duncan Robinson.

The Heat would also have a strong defensive unit with Bam Adebayo and Caruso at the top. Meanwhile, Butler and LeBron could share the point position given the flow of the game. Butler does everything he can to help teams win ball games, so he would be the ultimate team player for the Lakers.

Westbrook will be 33 years old next season. He has done everything you could ask from a player individually. He owns an MVP. He’s averaged four triple-doubles in his career. The only piece of hardware he doesn’t own is that exclusive championship ring. At some point, it has to start bothering him that Kevin Durant owns two rings, and will get a chance for a third with his other former teammate in James Harden.

This would be the ultimate NBA Finals battle if the Nets and Lakers made it. You would have the legacy of LeBron and the feuded rivalry between Westbrook, Harden, and Durant. Westbrook would allow LeBron to play his natural position while succeeding as a playmaker. Assuming Westbrook takes a page out of Chris Paul’s handbook as being more of a No. 2 or No. 3 option, this Lakers team would be hard to beat.

With Terry Stotts out as Portland’s coach, all eyes are on Lillard’s future with the team. Stotts was the only coach Lillard ever had. In nine years, Lillard has made one Western Conference Finals appearance with a boatload of first-round exits. When does Lillard throw in the towel and try to win a championship somewhere else?

Lillard will be 31 years old this season. He has at least two First-Team All-NBA seasons left in the tank. LeBron probably has just two more seasons left. This partnership makes all the sense in the world given where Lillard and LeBron are in their respective careers.

Out of all the players listed, Beal is the perfect fit for the Lakers. He is a true shooting guard that looks to score. He could give the Lakers offense even if LeBron or Davis were off the floor. While Beal is not a great defensive player, we shouldn’t underestimate what head coach Frank Vogel can do, given the team’s rankings in defense the last two years.

Beal would give LeBron some much-needed assistance. The Lakers can’t rely on LeBron for the offense on every possession. It’s just too late in his career to do that. With Beal as an automatic bucket, LeBron could go back to his facilitating role. LeBron should be the point guard of the team moving forward. It worked in 2020. If Beal and Davis were to stay healthy, the Lakers would be the 2022 NBA champions.