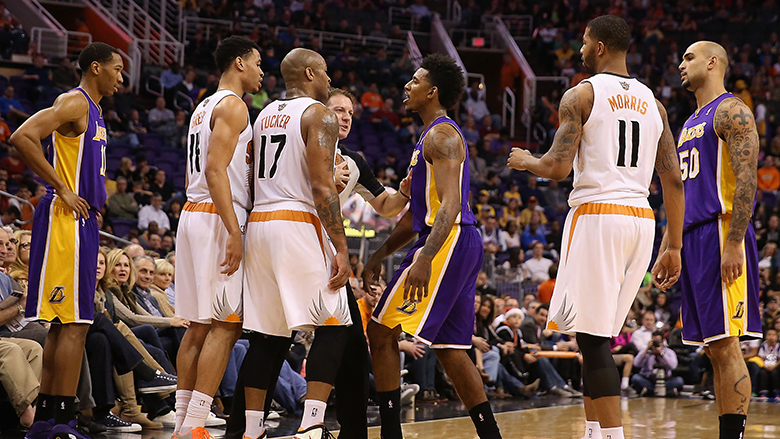 After a very long NBA career, Nick Young has decided to move on from a potential return for the time being. He’s been angling to get back on a roster for over a year now but hasn’t had any luck. According to Shams Charania of The Athletic, Young is headed to Zhejiang to play in the Chinese Basketball Association.

The Los Angeles Lakers guard was one of the biggest characters in the NBA when he was playing. Sometimes, his antics were distracting and that’s probably why he hasn’t gotten another chance. Despite the antics, Young averaged 38% from three throughout his 12 years in the NBA. He was a strong scorer most of the time but a liability on defense. Young is 35 so there’s a chance he could still make his way back to the league. First, he’s going to have to impress in China.

ALL the latest Los Angeles Lakers news straight to your inbox! Join the Heavy on Lakers newsletter here

Prior to the start of the NBA bubble, the Lakers were in the market for a playmaker to add to the roster. While most rumors were surrounding the team bringing in Dion Waiters or JR Smith, Young was pushing for a spot. He even went so far as to straight-up say that he wanted to go back to the Lakers.

The team ended up adding Waiters and Smith but left Young high and dry. A personality like his might have been a little too much in the bubble environment. If he never plays in the NBA again, he at least has a championship ring from the season he spent with the Golden State Warriors.

Speaking of Waiters, it appears his days as an NBA player could be over. The former fourth overall draft pick has had a very uneven career. There was a lot of hype for him coming out of college but he’s had trouble with consistency. He’s also had some issues off the court. This past offseason, it didn’t appear that any teams gave him a serious look. The veteran guard revealed that he’s considering retirement.

“They think I’m playing. I been contemplating it though—about retiring,” Waiters said. “It’s the politics for me. Game-wise, we know what’s up. I just can’t do the politics, man. We ain’t going over that water. I’ll retire before that.”

The hope was that he’d be able to turn his career around by joining a very good Lakers team. That didn’t really happen as he was inactive for most of the team’s playoff run. When he did play, he didn’t do a lot to warrant more minutes. He’s still a guy who can score points but probably would have a hard time finding a role with a team. That said, he’s only 29-years-old. There should be plenty of juice left in the tank. Perhaps he takes a year off and tries again next year. It’s hard to imagine he gives up on the NBA just as he’s supposed to be entering his prime.