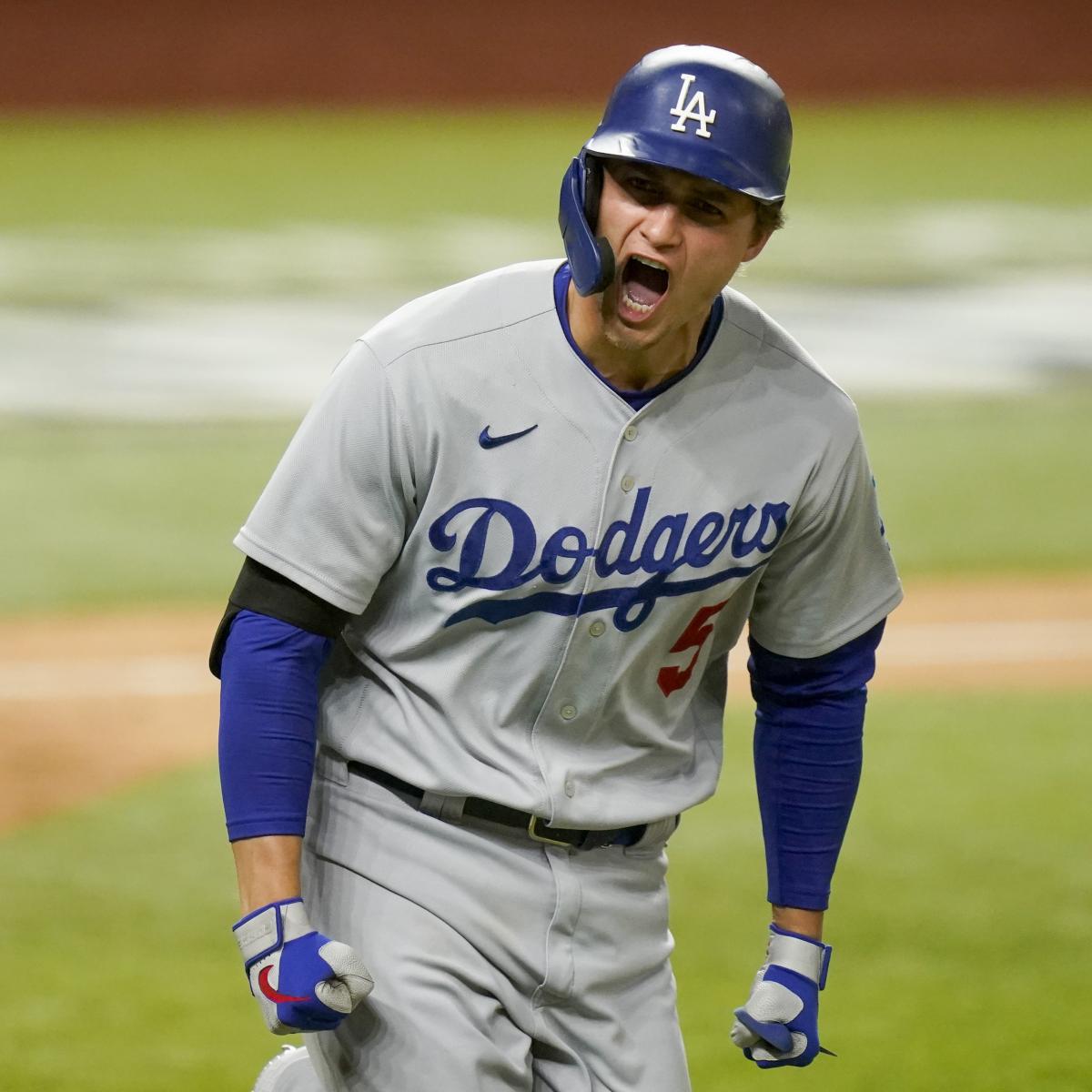 Shortstop Corey Seager hit a pair of home runs and catcher Will Smith hit a go-ahead three-run homer in the sixth inning as the Los Angeles Dodgers held off playoff elimination with a 7-3 win over the Atlanta Braves in Game 5 of the National League Championship Series on Friday.

The Dodgers trailed 2-0 in the fourth before Seager launched his first homer to halve the deficit:

Smith strolled to the dish with two on and two out in the sixth against a Braves southpaw also named Will Smith, and the hitter beat his pitching counterpart thanks to a three-run shot to left:

Will the real Will Smith please stand up? https://t.co/U6hlPhSxmy

Los Angeles then engineered a three-run, two-out rally in the seventh after a Chris Taylor double and Mookie Betts single led to Seager’s second homer, this time a two-run shot:

The Dodgers trailed Atlanta 2-0 after three innings, and it could have been worse for L.A. as Atlanta failed to capitalize on numerous opportunities to bury its opponent early.

That gave L.A. life in the middle innings, and Seager and Smith each took advantage.

Seager strolled to the dish in the fourth inning after reliever-turned-starter A.J. Minter was pulled after tossing three shutout innings with seven strikeouts. In came Tyler Matzek, and out went a 95 mph fastball for a home run.

As inconsistent as the Dodgers offense has been this postseason, Seager has been anything but, hitting .324 with three home runs and 11 RBI before he stepped foot in the batter’s box on Friday.

Still, the Dodgers needed someone outside Seager to step up and deliver a big hit, and they got it in the form of Smith, who launched a 3-2 pitch deep into center for the game-winning homer.

It was an excellent at-bat for Smith, who initially fell behind 0-2 before taking three balls.

Smith hasn’t had a great postseason: He had a five-hit game against the San Diego Padres in the National League Division Series but was otherwise 2-for-27 in the playoffs entering Friday.

That bad luck changed Friday, and Will Smith set a record in the process, per Elias Sports Bureau (h/t Sarah Langs of MLB.com):

Will Smith homered off Will Smith, in the 1st same-name PA in postseason history

It’s the 1st time in at least the Expansion Era (since 1961) that a batter homered off a pitcher with the same name (including regular-season matchups, since this was 1st PS PA)

The Dodgers went back to work in the seventh, and Seager gave the team some more breathing room, this time off right-hander Jacob Webb.

Seager joined some exclusive company after his second homer, per ESPN Stats & Info and Langs:

Corey Seager is the 3rd player in Dodgers history with a multi-HR game when facing elimination (Adrian Gonzalez in 2013 NLCS, Shawn Green in 2004 NLDS)

Corey Seager’s 4 HR in the 2020 NLCS are tied for the most HR by a Dodgers player in a postseason series, with:

That gave the Dodgers bullpen a five-run cushion with three innings remaining, and they safely held onto the lead en route to a Game 5 win.

Atlanta is forced to play the “What if?” game after finding itself with multiple opportunities for big innings only to see those chances squandered.

Catcher Travis d’Arnaud got to the plate with two runners on and one out in the first, and he proceeded to tattoo a Dustin May pitch deep into right.

A good start for the @Braves. #NLCS https://t.co/wRyksc9CEl

However, the moonshot stayed in the park and fell into Dodgers outfielder Mookie Betts’ glove for a sacrifice fly.

Atlanta led 1-0 in the first and took a 2-0 edge in the second after a Cristian Pache RBI single, putting runners on first and second with one out and the top of the order coming up.

The rookie likes the big stage!

But Ronald Acuna Jr. flew out before Freeman struck out, ending the frame.

The Braves got another rally going in the third after Ozuna and d’Arnaud opened the inning with singles, putting runners on first and second with no out.

After an Ozzie Albies groundout, shortstop Dansby Swanson got up and hit a pitch that dovetailed in front of Betts but eventually fell into his glove just inches off the ground.

Ozuna tagged up to score, but upon replay review, he left too early, and he was called out for a backbreaking double play.

From there, Atlanta needed just one more out in each of the sixth and seventh innings to leave those frames unscathed, but Smith and Seager’s homers prevented that from occurring.

The Braves got some runners on in the later innings but couldn’t mount a rally that brought the tying run to the plate, leading to L.A. enjoying a relatively drama-free ending to the game.

Game 6 will take place on Saturday at 4:38 p.m. ET in Arlington, Texas’ Globe Life Field. An Atlanta win sends the Braves to the World Series. A Dodger win forces a series-deciding Game 7 on Sunday at 8:15 p.m.