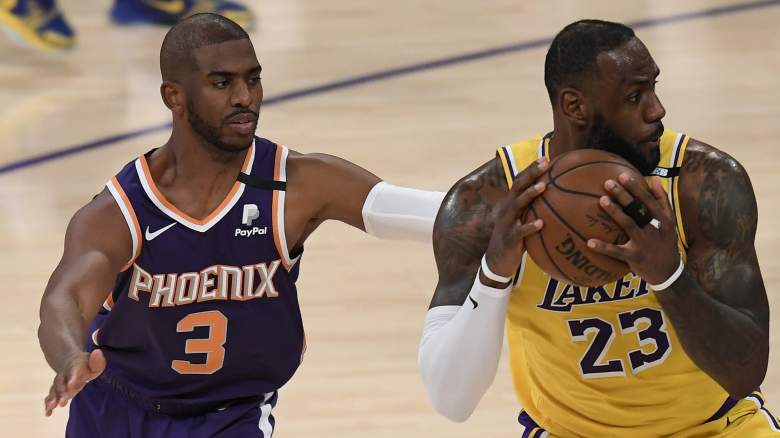 Phoenix Suns guard Chris Paul took issue with the claims made by Los Angeles Lakers star LeBron James and others about the NBA’s condensed schedule and the bevy of injuries that have plagued the postseason.

Paul is the president of the National Basketball Players Association and is instrumental behind the scenes. He was asked specifically about the comments made by James during his NBA Finals media availability on Monday.

“Injuries are always unfortunate. You hate to have them. But just like when we went to the bubble, everything was discussed as far as the players and the full body of players,” Paul said while speaking to reporters, per Yahoo Sports. “Everything that’s good for this guy and that guy might not be the same for that guy. But everything has always been a conversation, and it’s going to continue to be that way. So if people don’t like it, then you know everybody has the same opportunity to be a part of all these conversations.”

A record nine All-Stars have missed time in the postseason due to injury, per Mark Medina of USA Today. That includes Lakers forward Anthony Davis, who suffered a groin injury against Paul’s Suns that derailed the LA’s repeat bid. The Lakers had just 71 days between winning the title in the Orlando bubble and the start of this season.

James expressed his opinion last month in a lengthy Twitter rant that was triggered by injuries to Nets guard Kyrie Irving and Clippers star Kawhi Leonard.

“They all didn’t wanna listen to me about the start of the season,” James tweeted. “I knew exactly what would happen. I only wanted to protect the well being of the players which ultimately is the PRODUCT & BENEFIT of OUR GAME!

“If there’s one person that know[s] about the body and how it works all year-round it’s me! I speak for the health of all our players and I hate to see this many injuries this time of the year. Sorry fans wish you guys were seeing all your fav guys right now.”

James’ criticism has been the most high-profile attack on how the season unfolded. Paul reiterated that there’s a ton of collaboration that goes into the decision-making process.

“One thing about our league and its players is everything is always a conversation,” Paul said. “There’s a ton of guys on the executive committee who are working hard on things right now as we speak — day in and day out, traveling. I wish you guys knew all the things that are going on. So decisions that are made as far as playing or not playing, players are always involved in it.”

Paul and James have been open about their close friendship over the years, with the two making up half of the “Banana Boat” crew. Dwyane Wade and Carmelo Anthony are the other members.

After years of struggling and tough breaks, Paul has made it to the NBA Finals stage for the first time. However, James has been noticeably quiet about it, not making any public acknowledgment via social media on CP3’s accomplishments while weighing in on other happenings around the basketball world.

James was recently called out by Fox Sports personality Skip Bayless for trying to “upstage” Paul on the night he sealed his first Finals trip with 41 points.

“Am I understanding correctly that LeBron took Dame to the WNBA game being played down the street from Staples at the Convention Center WHILE LEBRON’S CLOSE FRIEND CP3 WAS PLAYING FOR HIS 1ST FINALS? HOW CHILDISH WAS THAT, TRYING TO UPSTAGE CP3/CLIPPERS AT STAPLES? So LeBron,” he tweeted.

So where could the sudden beef have originated? The two had an exchange during their first-round series where Paul undercut James, which the Lakers called a “dangerous play.”

We’ll see if this story gets any deeper and if James has any praise for Paul if the Suns end up hoisting the Larry O’Brien Trophy.